Passed away peacefully at Knollcrest Lodge, Milverton on May 22, 2020 at the age of 93. Arnold was born on February 24, 1927 in Mornington Township, Ontario.

Loving father of Dean Riley of Milverton. Arnold will be fondly remembered by his sister-in-law Jackie Patterson and his nieces, nephews and their extended family members.

Arnold is now reunited with his beloved wife of over 60 years, Lois Dorothy (Fetter) who passed away April 6, 2016. Arnold was predeceased by his parents Charles and Ethel (Schlotzhauer) Riley, and his two brothers Harold and his wife Jenny, and Les and his wife Helen.

Arnold farmed in Mornington Township until he moved to Milverton where he worked at Topnotch Feeds until he retired.

Arnold was a member of St. Paul’s United Church, Milverton and enjoyed an active role in his church community.

A private family service will take place at the Mark Jutzi Funeral Home, Milverton. Interment to follow at Greenwood Cemetery in Milverton. Expressions of sympathy can be made to Knollcrest Lodge or St. Paul’s United Church. 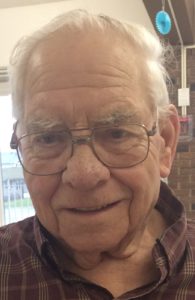