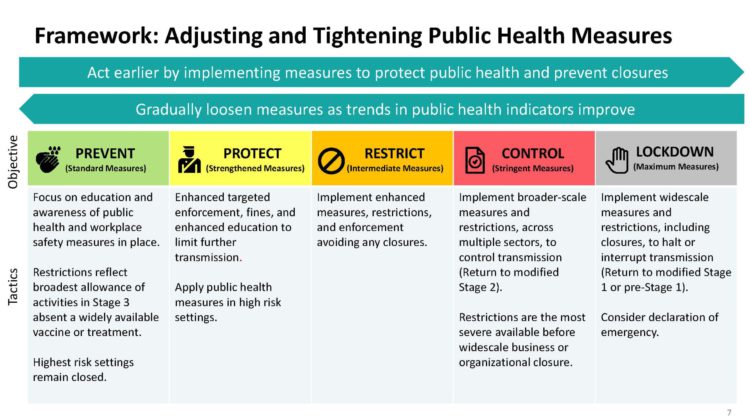 The Medical Officer of Health in Huron Perth is recommending to the province that this area be moved into the Orange-Restrict zone of the province’s public health restrictions.

Dr. Miriam Klassen said socializing in households continues to be a significant source of the spread of COVID-19 in Huron-Perth and she has recommended to the province that this area be moved up to the next level of public health restrictions, “I did recommend that they strongly consider moving us into Orange with all the factors that we discussed.”

Those factors include, what is happening in neighbouring regions like Waterloo and Southwestern Public Health coupled with the number of people in hospitals due to the move of Cedarcroft Place residents. Klassen says, “I think those are all factors that also speak in favour of moving to orange. Our numbers are largely driven by two factors, one is Cedarcroft and the other is the outbreak in Perth East. We have all seen how quickly that can suddenly escalate and spread into the community.”

The announcement could come as early as Friday.

Dr. Klassen says she understands people are tired after eight months but we need to keep going even with a vaccine on the horizon, “We are still in this for the foreseeable future. We need to continue to follow public health measures for the foreseeable future. And if we don’t, we are going to see rapid escalation of cases in clusters like what was seen in Perth East, those will spill into schools, those will spill into our vulnerable settings eventually.”