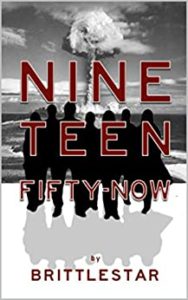 Stewart Reynolds also known as Birttlestar, a local social media expert wrote a short story book a couple years ago called Nineteen Fifty Now.  With the power of social media, Stewart turned to Twitter looking for help to turn this book into a TV series.  He received several responses from screen writers and ended up signing a deal with Pixcom, a Montreal-based independent television company.

Celina, morning show host on 107.7 2day FM and Stewart chat  about the book and upcoming series.