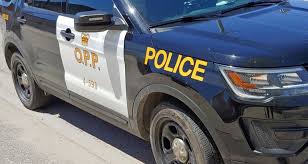 Two people face weapons charges after their vehicle was stopped in Mitchell.

Perth County OPP says they stopped a vehicle on St.David Street just before 4:30 p.m. on November 18th after a person was seen breaking their bail conditions.

Police say a firearm and a crossbow were found and, with both people in the vehicle not allowed to possess firearms, they were arrested.

A 33-year-old and a 48-year-old from West Perth now face charges with both scheduled to appear in court in Stratford.