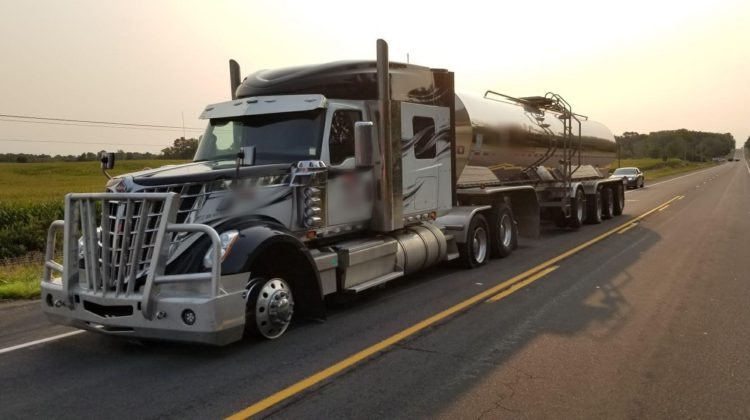 (Image supplied by Huron County OPP).
Huron County OPP are crediting one of their own with helping end a dangerous situation in Huron East.
Just before 8 o’clock Wednesday morning, police say two calls came in about a commercial truck driving erratically on Highway 8.
Witnesses reported the truck was westbound from Seaforth travelling at low speeds into the oncoming lane.
OPP officers responded and were able to find the truck near Front Road.
Despite numerous police vehicles following behind, with lights and sirens on, the driver failed to stop and police deployed spike belts with several tires on the truck deflatiing.
However, the vehicle continued trucking along at a slow speed.
As the truck was getting closer to Clinton and school zones, an officer leapt onto the side of the vehicle and was able to get into the cab compartment.
They were finally able to get the truck stopped and the driver out of the vehicle.
Police say they suspect the driver was experiencing a medical related event but the incident remains under investigation.

Huron Perth MOH: We have an opportunity to act now to try to mitigate COVID-19

Milder than normal fall in store for Perth County