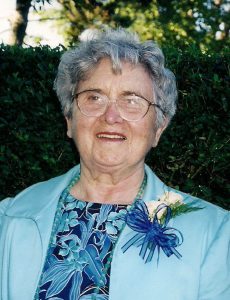 Florence Dorothy Bowman, formerly of Stratford passed away peacefully at peopleCare Oakcrossing in London, on Monday, March 2, 2020 in her 100th year.  Florence is survived by her children; Nancy Jacobson (Ken) of Thunder Bay, Keith (Barb) of Etobicoke, Jim (Barb) of Waterloo, Judy Pilling (Robert)  of London, John (Helen) of Stratford, Marg Glassford (Jim) of Mississauga and Ross (Clare) of London. Florence is also survived and will be missed by her daughter-in-law Judy Bowman (Doug) of Stratford, sisters Gladys Fraser and Marian Davis, sister-in-law Iona Munn, brother-in-law Norm Wodhams, 23 grandchildren, 39 great-grandchildren and many nieces and nephews. She was predeceased by her husband Albert in 2010, son Peter, grandson Dennis Bowman, parents Arthur and Florence Greenwood and 11 brothers and sisters. Flo was an active member of her community both in Fullarton and in Stratford.  These activities included the UCW (Fullarton), the Womens’ Institute, teaching 4-H classes, writing columns for several local newspapers, the Stratford Horticultural Society and various positions within the LDS (Latter Day Saints) Church. She and her husband served a mission for the LDS Church in the Kentucky-Louisville area in 1985-86. Born in Glenelg Township near Durham, Ontario on November 30, 1920, Flo was the sixth of 14 children. In 1936 the family moved to Toronto and it was here she met her future husband, Albert whom she married on November 14, 1942. During the war years they lived in Toronto, Goderich and Exeter before finally purchasing a farm on the outskirts of Fullarton. They lived on the farm until 1990 when they retired to Stratford. Flo was an avid gardener and flower arranger, cook extraordinaire, reader, and scrabble player. She loved entering flower arrangements in local competitions as well as entering many baking competitions. Visitation at the W.G. Young Funeral Home, 430 Huron Street, Stratford on Friday, March 6 from 2 – 4 and 6 – 8 p.m. The funeral service will be held on Saturday at The Church of Jesus Christ of Latter Day Saints, 689 Huron Street, Stratford at 11 a.m. followed by a reception. Interment in the Fullarton Cemetery in the spring. As expressions of sympathy, memorial donations to the Heart and Stroke Foundation, The Church of Jesus Christ of Latter Day Saints Perpetual Education Fund or the Thamesview United Church Fullarton Cemetery Fund through the funeral home. 519.271.7411 www.wgyoungfuneralhome.com